Four years ago, as I was exhibiting at MAISON ET OBJET a man stopped on my booth and introduced himself.
He was the mayor of a small community in the east of the country and was looking for a mural artist to paint a new decor in his town hall entryway. He had a surface of 2X2 m and and intended to illustrate a local historical event :
the oldest peace treaty we have kept track of in the history of our country had been signed in his village in 587.
The place is named Andelot and the treaty known as the "Traité d'Andelot".
We talked a little bit about the project and I said I would call him back after having made researches and a sketch.

As I had just spent a couple of weeks painting with famous public artist William Cochran I was still full of the numerous and rich conversations I had had with William . My views on public art had been very vague so far .
With William I learnt that public art could be a real asset for a community. It could bring people together , it could give people a sense of belonging to a special place and consequently foster local energies and creativity. It could make a very ordinary place attractive for other people, for tourists, and eventually lead to  economical growth and business development.
All this lead me to tell this mayor that he had a great story to tell ( the treaty, even though it does not belong the major events of our history has been tought in schools for  decades) and that it deserved more than 2x2m , that if he had an exterior wall where I could paint, this would be worth it.

He got back to me very quickly, I drove to his place and we examined different possibilities.
We decided that the best place for the mural was this one ,

in the very center of the village, right by the school( the building with white windows and shutters) and on the square were local small businesses and shops had been forever, an ideal location!

I started researching seriously and produced the first sketches. The idea is simply to illustrate the day the treatee was signed .
King Gontran, seated on the left , welcomes King Childebert and his mother Brunehilde. The treatee will put an end to a period of wars and murders it will also lay the ground for harmonized rules of commerce and a new relationship between the aristocrats and the kings.
A XV th century manuscript mentions and  illustrates it ; I had the idea of using as a background for  the figures, this was the very first idea: 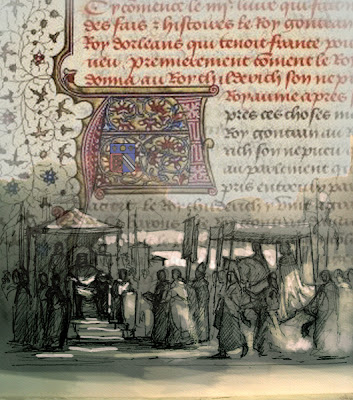 ,then, for a pedagogical sake, I decided to put a map that shows the territorial division and locates, on the frontier between Bourgogne and Austrasie, the little city of  Andelot.
At the bottom, I wrote the very first line of the original treaty in which one can recognize the names of the protagonists, Gunthram, Childabartus, Brunechildis and even the name of the village "andelaum". 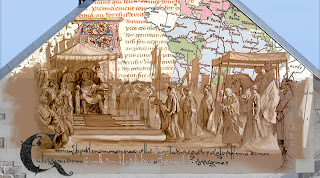 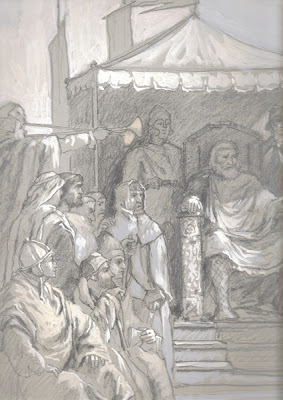 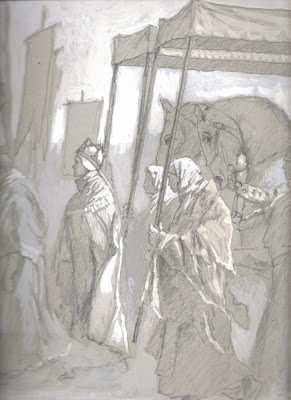 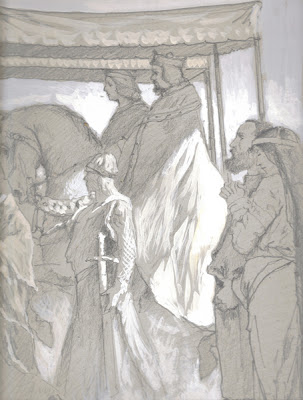 The sketches were approved by the mayor and his community council .

But then, the mayor started telling me that other historical events had taken place in or around this village :
- the discovery of an important neolithic settlement
- two major roman roads that crossed a couple miles away from the village and the presence of the largest amphitheater and gallo-roman mosaic in Grand ( 12 miles away)
-  two local "chevaliers"  had taken part in the second trial of Joan of Arc
-  a manifesto written by Gaston d'Orleans, son of Henry IV, who temporarily settled down in Andelot in 1632 and stated his political opposition to his brother Louis XIII and Cardinal Richelieu
-  a major peasant's riot had occured in the local valley ( Val rognon) by the end of Louis XIV's reign and was said, by certain historians to be a foresign of french revolution
- Andelot was also the birthplace of a quite well known composer of the XVIIIth century, Pignolet de Montéclair
-  in 1945,Andelot had been freed, by french 2émé DB of Général Leclerc, from german occupation during  of one of the most important panzer battles of the time
- !!!!!!!
After telling me all this, he added that he had started searching for funding and that he thought the program would probably grow from one single mural to ten or twelve !!!
All this took some time and to make a long and complicated story short , here we are, thanks to the incredible energy of Jean-Philippe Geoffroy, the mayor, money has come and we are now talking about  a twelve murals program.
Each mural will be lit and some of them will have an audio system with a commentary recorder by famous french actors.
Two of them , Michel Galabru and Eric Cantona ( former soccer superstar) read the commentaries of the frist frescoes, other big names are about to participate to the project.

Here are pictures of the first one, " Signature of the "Traité d'Andelot", place Cantarel.

I worked on this project with mural artist Hubert Pintrand, one of the most experienced and talented mural painters in the country and one apprentice Stéphane Leneuf helped us in the studio. 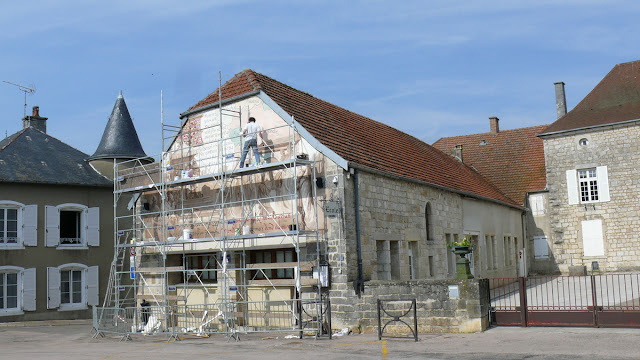 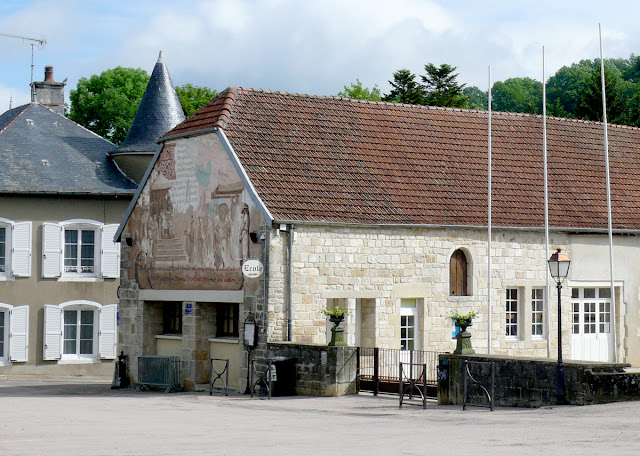 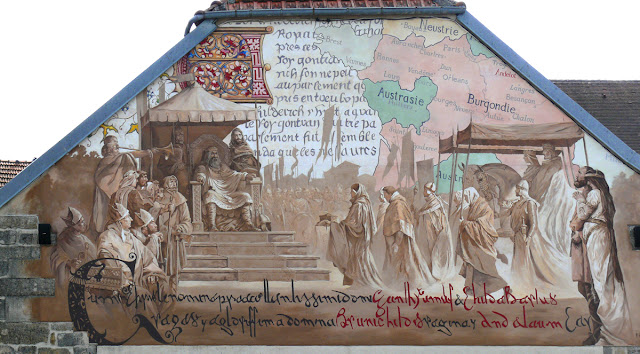 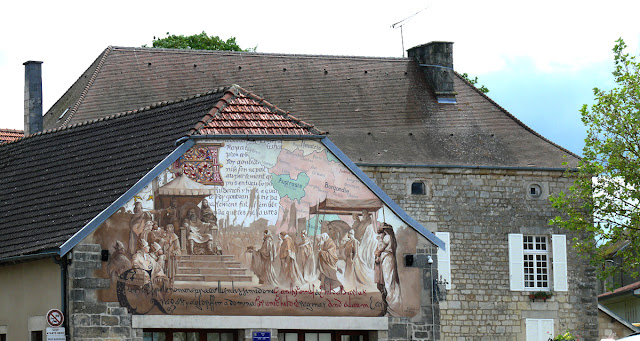