Nearby our new home, in Megeve, one of the most  famous ski resorts of the Alps there is a nice shop, in the center of the village. It is called " Au Soli" (" in the sun" ...reminds me of " At Solsidan" by Carl Larsson).
The owner, one of the most passionate persons I know is a master cabinet-maker and a pure lover of the crafts of our mountains. He is a sort of scholar, incredibly knowleadgeable when it comes to the Alps, their traditions, crafts, history. His shop is a marvellous place that reflects his curiosity, his taste and the energy he puts in his work.
He found me at Maison et Objet a few years ago and ordered me a beautiful folding screen with paintings inspired of A.Calame.

Last year I did several paintings for him.

First a relatively large panel inspired by two different posters of the 1920's and 40's. 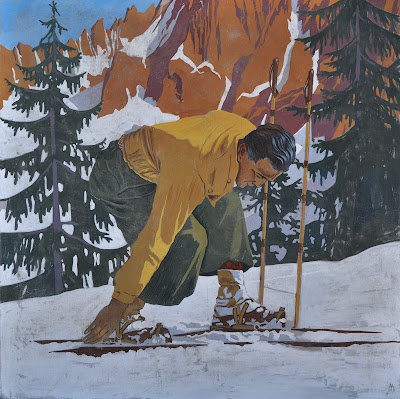 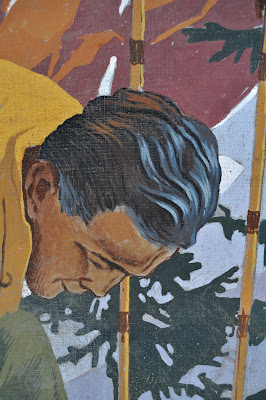 Then he talked to me about a very special piece of furniture that he had managed to find in some remote area and copied in his workshop.
He suggested that I create an ornament for the inside of the body and some "golden age" mountain scenes with figures for the inside of the doors.
I must say that I  would not have had this idea, but  I trusted him...and I think it was the right thing to do... the mix is in fact very unsual but it works perfectly. 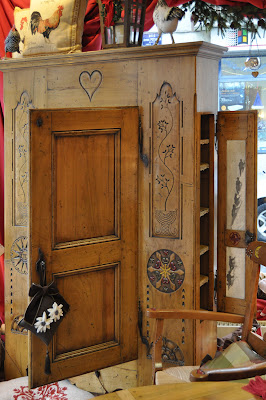 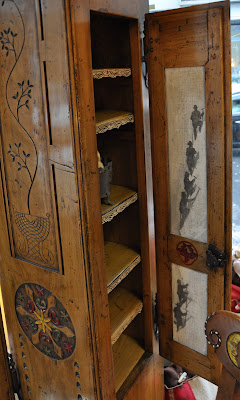 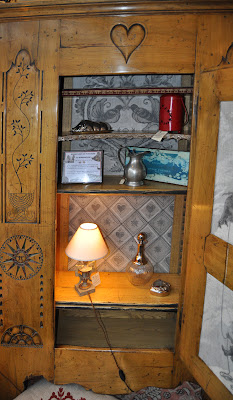 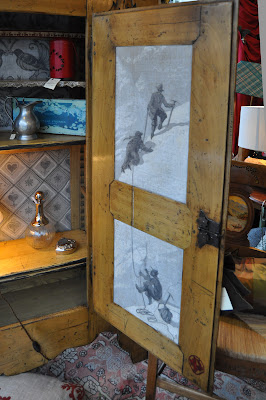 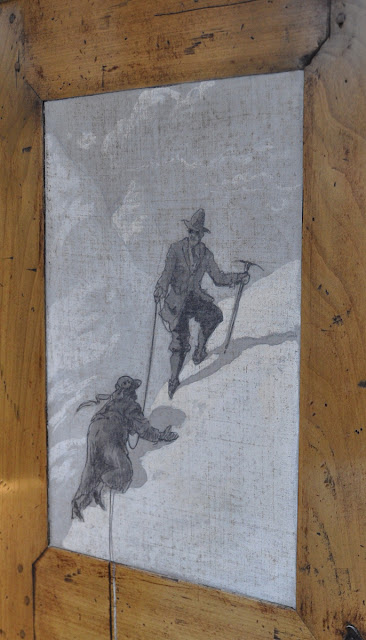 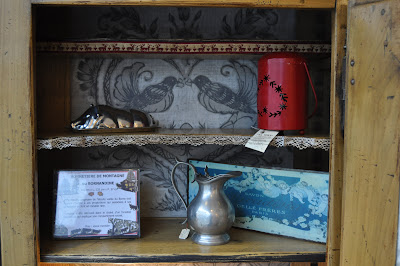 He also asked me if he could borrow one of the canvases he had seen in my studio when he visited me as I was working on this commission.
It has been installed in the shop he owns down in the valley.
This painting was some sort of exercise I did for the exhibition of Salon in Versailles two years ago.
The mountain in the background is the Mont Blanc, pretty much as  we can see it from home.
The two figures are "borrowed" to Van Honthorst, a dutch painter of the XVIIth century. 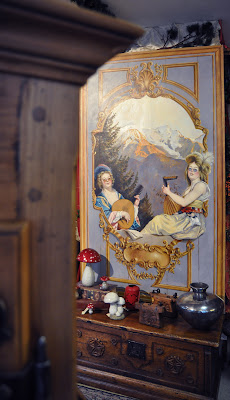 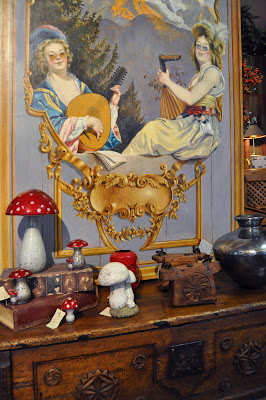 In May, I also painted this little chest of drawers for him.
I covered the whole thing with paper and painted an "academic" alpine landscape inspired by paintings of  A. Calame, one of the most talented romantic mountain painters ever. 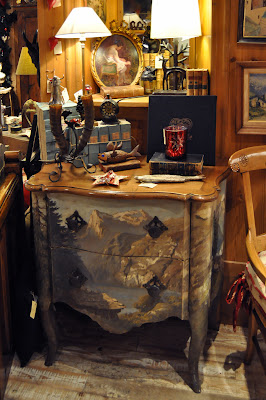 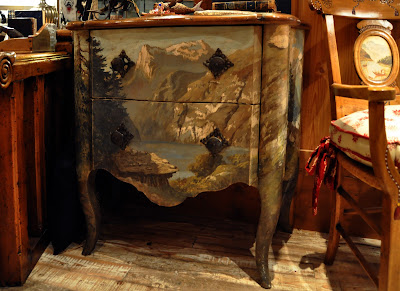 And finally I also painted four more small panels in the same style as the first one in this post.
They are all inspired by 1950s italian and swiss advertizing posters for ski resorts.
I have sometimes copied them quite literally and some other times I have made changes , in the backgrounds particularly. 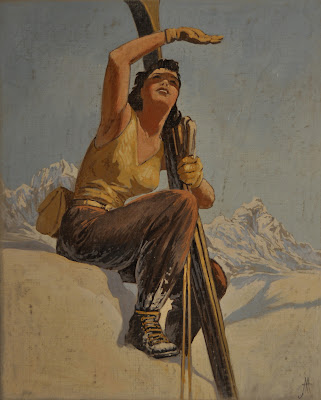 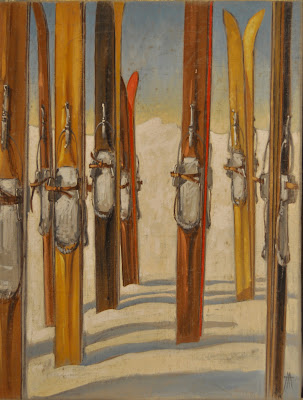 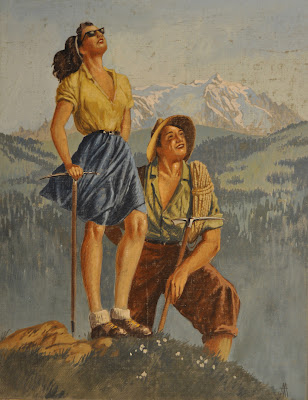 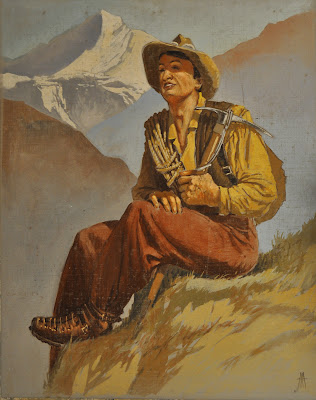 Here are three of them in the shop " Au Soli" in Megeve. 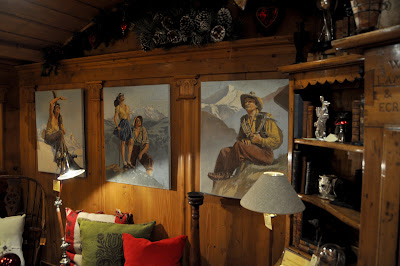 It is a pleasure, and a pride, to be able to coopoerate with inspiring people like this man.

Dear "Demeures Peintes" members, clients and friends, I am happy to wish you a prosperous and beautiful year. 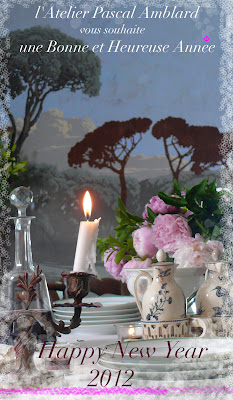 I am also very pleased to announce you that our new studio is now located in a charming village of  Haute-Savoie, Domancy, between Geneva and Chamonix. 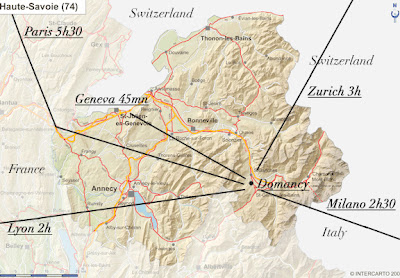 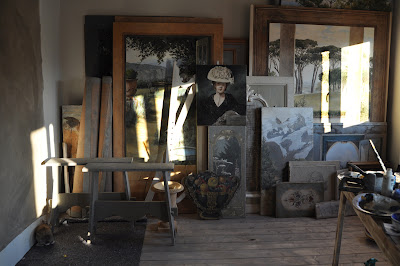 and here is another one I took tonight. 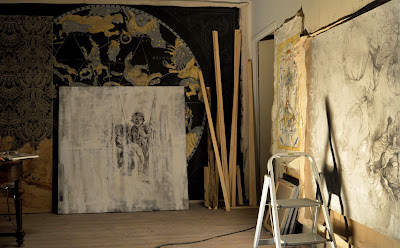