Here is another one...I installed it by mid-July. This is one more astonishing example of the richness of the history of this small community.
Around 1432 , after Joan of Arc'c trial and execution , two "chevaliers" of Andelot where commissioned to take part to the Joan's rehabilitation trial.
In these times Andelot was in fact the official legal center of a vast territory which included Domrémy, Joan's home town ...where she grew up, as a shepherdess, and heard her "voices" ( God telling her to go help Charles IV become king and kick our british neighbours out of french kingdom !)
The two men rode to Domrémy and gathered information about Joan's life and personality  from different local witnesses.
Their report said that Joan was certainly not a witch and on the contrary a good christian. This of course  was not what Joan's opponents ( led by the bishop Cauchon) wanted to hear and the local authority, the Bailly of Chaumont ( larger city ruling over Andelot ), was not happy at all with the chevalier's report.

I have represented this confrontation , on one side the chevaliers and their men, on the other the Bailly and some priests or bishops and their guards.
In the background, Joan in the middle of a furious battle , in the foreground the chevaliers riding to Domrémy...
My source of inspiration for the composition was a marvelous painting by Albert Herter. 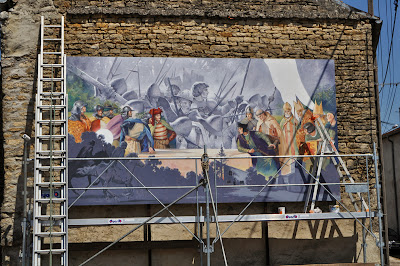 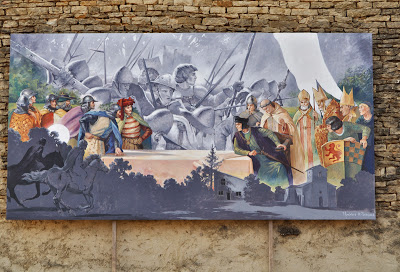 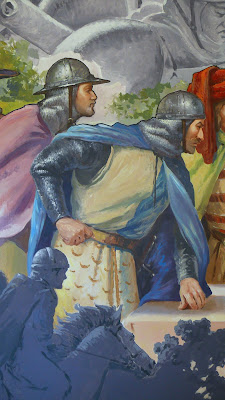 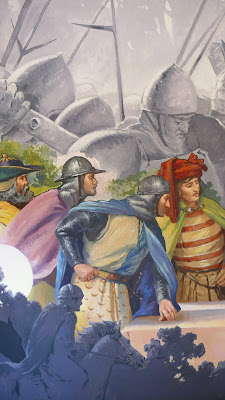 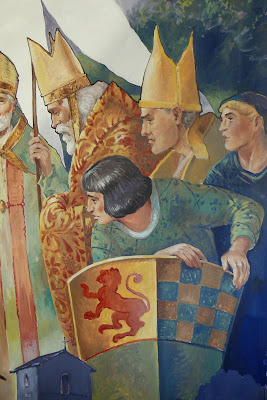